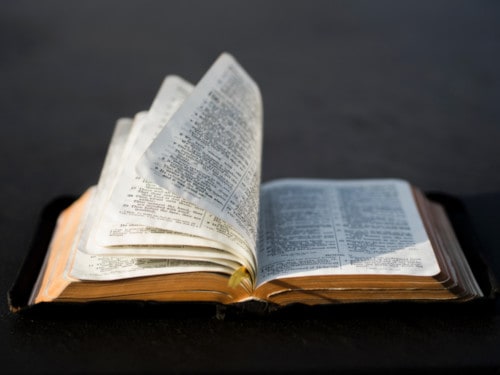 The End of the World

Unless you’re in one of those “phony baloney, plastic banana, good-time rock ‘n’ roller” churches, or you’ve been living in a cave for 50 years, you know that current events are building towards something big.

As a Christian I believe that the only reliable source of information about the past, the present, and the future is the Word of God. When I started studying, with just a Bible, and a word search program, I started finding things that I never imagined. So I want to share them with you.

The scripture from which I draw the conclusions that I present to you in this series, will be presented in the articles that follow.

Throughout this series, when you see a thin, light grey rectangle, with a black triangle on the far left, pointed at a scripture reference and comment, stretched horizontally across the screen, just click on it, and the rectangle will drop down to reveal the entire passage of scripture. Click a second time to close it up again.

I ask only that you search the scriptures to see if these things be true, and to correct me with scripture if they are not. This is too important, and time is too short for my ego to get in the way. I don’t have to “be right,” but I do have to “get it right.”

My Foundation, and Starting Point

“And he said unto them, I beheld Satan as lightning fall from heaven” (Luke 10:18)

Beheld is a past tense usage. Does that mean Satan already fell from heaven at some point in the past? How does that square with the passages from Job, where Satan came before the throne of God with the other angels?

Among most Christians I have spoken to, there seems to be a widespread, almost unconscious assumption that Satan was cast down from heaven some time in the far distant, but undefined past. Perhaps even as long ago as when Adam and Eve were cast out of Eden.

However, that would mean that the war in heaven described in Revelation chapter 12 already happened. How can that be? If Satan has already been cast down from heaven, he can no longer be “The accuser of our brethren” (Revelation 12:10)

Do these statements make perfect sense when we consider that Jesus IS the very person of Jehovah God, in the flesh?

“Before Abraham was, I am“ said Jesus in John 8:58. That is a real head twister. But if we simply accept that God exists outside of our three dimensional time-space, it all fits neatly together.

The war in heaven is a future event in our timeline, but God IS (present tense) in all timelines simultaneously, and Jesus IS “Emmanuel, which being interpreted is, God with us.” (Matthew 1:23).

Satan has not yet been cast down to our world, but he will be, soon. See Revelation chapter 12 for the “deep blue hero stuff.”

Jesus told them who he was

You may have heard unbelievers say “Jesus never claimed to be the son of God.” This is a false statement. When Jesus said “before Abraham was, I am,” he was taking the listeners back to the burning bush in Exodus chapter 3, when God told Moses to go bring the Israelites out of Egypt. Moses said ‘when they ask me what your name is, what am I supposed to tell them?’ “God said unto Moses, I AM THAT I AM: and he said, Thus shalt thou say unto the children of Israel, I AM hath sent me unto you.” (Exodus 3:14)

But…Abraham was over 400 years before Moses, and revered by the Jews as the father of their faith. So when Jesus said “Before Abraham was, I am,” They knew he was claiming to be the LORD God of Abraham. Which is why the very next verse (John 8:59) begins with “Then took they up stones to cast at him:” There are multiple such examples in the Gospels.

My Background and Biblical Outlook

“I put the fun in fundamentalist”

During my childhood, our family attended a free will Baptist church until I was 12 or 13. Then we moved to an “independent, fundamental Baptist church,” where C.I. Scofield was the fourth member of the Trinity, and James Strong’s numbers were infallible (of course I’m exaggerating to make a point. But some of you can probably relate).

Many (if not most) such churches adhere to what is called dispensational theology. A foundation of dispensationalism, seems to be the strange idea that Israelite believers and Gentile believers, make up two separate bodies of believers, and that God deals with them in different ways. Additionally, the pre-tribulation rapture of the Gentile church seems to be of critical importance to many who hold a dispensationalist world view.

If I had a nickel for every time I’ve heard “The next event on God’s prophetic timeline, is the rapture of the Gentile church. After which, the Antichrist is revealed, and a seven year period known as “the great tribulation” ensues,” I could probably buy lunch at Burger King.

When my father died, 22 Dec 2008, it was as if God was telling me “wake up boy, it’s time for you to get serious about me.” So, I started studying the Bible on my own. Just the Bible, no commentaries.

Dad taught me that the Bible is the best interpreter of itself. He had lots of Bible history books, books about creation science, and things like that, but very few commentaries on the Bible.

I started reading, and looking up instances of words with a Cruden’s concordance. Some years later, I found a pretty good piece of search software called Pure Bible Search, that I’m really impressed with. It is completely free, without registration or any other impediment.

Ultimately, I discovered that many of the things the preachers of my youth said from the pulpit, which I just accepted without checking, are not actually in the Bible.

The Bible spells out in plain text, multiple times, that there is NO separation between believers in Jesus, whether they be Israeli OR Gentile. There is “One Lord, one faith, one baptism” (from Ephesians 4:1-6), and there is only one way. We all go through Jesus, who said “I am the way, the truth, and the life: no man cometh unto the Father, but by me.” (John 14:6) God does not stutter or equivocate. “No man” means no man.

“I will build my church”

Jesus made that statement in Matthew 16:18 to his disciples. So when we are told in Acts 2:47 that “…the Lord added to the church daily such as should be saved” it should make perfect sense. Yet, Cornelius, the first Gentile convert, didn’t show up until years later, in Acts chapter 10. For those who believe that “the church” is made up of Gentile believers, this presents a problem.

Interesting side note about Acts chapter 10

In addition to introducing Cornelius, the first Gentile believer, Acts chapter 10 is the same chapter in which God “cleaned the pig,” as opposed to ‘doing away with unclean things” as some have claimed. See also 1 Timothy 4:1-5.

If you can find it, I would truly like to know.

Additionally, there is no mention of “the antichrist,” a word which only appears 4 times in scripture.

My example of antichrist is not meant to deny that there is an antichrist. Rather, I mean to be more precise with the language I use. The word antichrist does not occur even once in the books of Revelation or Daniel. But they both use “the beast” a lot.

My conclusion is that “the antichrist” that most Christians speak of, should more accurately be referred to as “the beast.” Further, as I will show later, I believe the Bible identifies him by name.

Real vs Counterfeit
How can you tell?

These are just five examples of the many thousands of variations you will find if you start comparing Bible “versions.” As for me and my house, we will use the King James Bible (also called the Authorized Bible).

You will have to spend some time with God to get the answer for yourself. But I want to leave you two points to ponder:

“For God is not the author of confusion, but of peace, as in all churches of the saints.” (1 Corinthians 14:33) The examples above introduce potential confusion. Satan can use the fact that “words mean things,” to twist the meaning, and introduce all sorts of false doctrine.

The Gospel is “the power of God unto salvation to every one that believeth;” (Romans 1:16), it is THE super weapon in our battle against the powers of darkness, but if it we allow it to be sabotaged, then we are left without arms or armor. “For if the trumpet give an uncertain sound, who shall prepare himself to the battle?” (1 Corinthians 14:8)

Wake up and get ready, because the end times is upon us

The next installment will be a brief overview of Bible Typology, and then we’ll dive into the data and details of our Eschatology study.