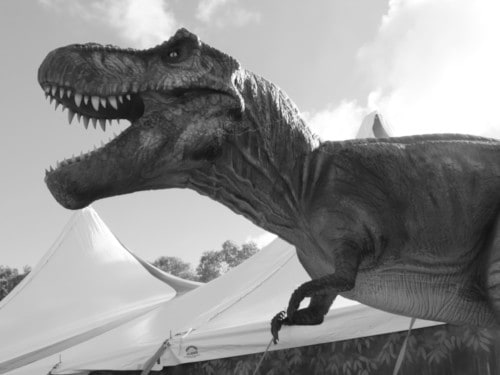 The End of the World

Imagine you’re leaving home one morning, coffee mug in hand, to go about your business. As you lock the door and turn towards your car, you notice movement out of the corner of your eye. Turning your head towards the neighbor’s house, you see a Tyrannosaurus Rex calmly eating your neighbor and his dog, who were out on their morning walk.

Everybody knows that there has not been a Tyrannosaurus Rex on this planet for a long time. As a result, your mind would refuse to process the information that your senses are conveying to it. For a moment, you would experience a glitch in your mental software.

Hopefully, your brain will be able to reboot and take action before the dinosaur in question notices you, his second course, standing there trying to process facts that run counter to everything you have been taught, or the assumptions you have held, your entire life.

Especially About the Apocalypse

Apocalypse… Isn’t that the end of the world?

Even the word apocalypse has been twisted into something dark and ominous, when it just means “to remove the cover,” or “reveal.”

When I began to read the scriptures contained in this series, my mind did not process them at first. Because all my life I “knew” that the end times and the return of Jesus, was going to happen a certain way. While there are variations, the general idea is, ‘first, Jesus is going to come rescue us, and then a lot of really bad stuff is going to happen.’

The lyrics from the traditional hymn shown below, are shockingly unscriptural. Music is just one of the many ways that false teachings creep into churches.

On that bright and cloudless morning when the dead in Christ shall rise,
And the glory of his resurrection share;
When his chosen ones shall gather to their home beyond the skies,
And the roll is called up yonder, I’ll be there.

“When the roll is called up yonder,”

We Live What We Believe

As I read the plain text of scripture, the understanding of what I am going to share with you, began sink in. On one hand, I was a little disturbed by the realization that there are things accepted as fact by many professing Christians, which are simply not true. But on the other hand, I got excited about having a front row seat for the end of the world. The time is at hand!

If you are not a Christian:

The information I present, will probably sound crazy to you. Still, I invite you to check it out, because my prayer is that you meet Jesus in person, and get to know him as a brother.
“For both he that sanctifieth and they who are sanctified are all of one: for which cause he is not ashamed to call them brethren,” Hebrews 2:11

Further, we need to wrap our minds around the fact that the supernatural is more real than our three dimensional time space. But for most, our belief in the supernatural is colored by our experiences and inputs during a lifetime of immersion in modern pop culture.

These misconceptions about the supernatural have influenced a great many people to have preconceived notions about angels, devils, and spirits.

We tend to think of heaven as being somewhere “way out there in space or something.” I remember as a young man, looking at pictures of the crab nebula, taken by the Hubbel telecope, and thinking that heaven must be in some place like that, millions of light years from earth.

In fact, heaven is much closer than I ever imagined. So close that when the veil is parted, shortly after the end begins, the whole world will be able to see the throne of God.

There is a wild ride ahead all the inhabitants of the earth. Many of us are likely to die during the few short years we have remaining before the return of the king. But, if you are a believer, this should not trouble you. Grab a Bible, and read 2 Corinthians chapter 5.

Far from being morbid, or having a death wish, this knowledge enables me to take great comfort in Romans 8:35-39.

{35} Who shall separate us from the love of Christ? shall tribulation, or distress, or persecution, or famine, or nakedness, or peril, or sword?
{36} As it is written, For thy sake we are killed all the day long; we are accounted as sheep for the slaughter.
{37} Nay, in all these things we are more than conquerors through him that loved us.
{38} For I am persuaded, that neither death, nor life, nor angels, nor principalities, nor powers, nor things present, nor things to come,
{39} Nor height, nor depth, nor any other creature, shall be able to separate us from the love of God, which is in Christ Jesus our Lord.

Because, whether I view the end from here on earth, or from heaven, or if I get upgraded to first class sometime in the middle… I win.