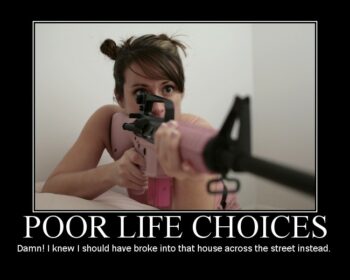 or…facing reality with an equalizer

Depending on your locale, you may have noticed that the tenor of conversation in the public square has become rather strained of late.

There are calls to de-fund the police, to disarm the Citizens, to “de-criminalizing drugs,” and a general antipathy toward anyone who is even remotely conservative, productive, and traditional… and this is just off the top of my head. No doubt you too may have noticed social changes that make you feel less safe than you did a few years ago.

Have you also noticed that there are voices who suggest that the United States become more like some corrupt European disaster? Complete with unchecked immigration, and a corresponding increase in violent crime?

Never Give Up Your Guns!

You’ve seen how the Australians and the British are being treated by their elected servants, haven’t you? If Americans should ever be tricked into giving up their absolute right to own and carry weapons…all that, and more will happen to us.

A well regulated Militia, being necessary to the security of a free State, the right of the people to keep and bear Arms shall not be infringed. (2nd Amendment to the Constitution of the United States)

This article is not meant to be a treatise on the philosophy behind the 2nd amendment. However, you should take the time to look at the Constitution and the Bill of Rights. Study the grammatical construction. Nowhere does it “grant” any rights. It speaks of your rights as something that already exist, and it forbids government from trampling those rights.

But I don’t own a gun

I’ll bet you’ve been considering it, haven’t you?

Adam Smith, an economist, coined the phrase, “the invisible hand.” He was referring to the vast number of individuals making choices that combined to move entire markets. Five thousand women buying Jimmy Choo’s Vamp silver gun metal means they are popular enough to make more (fun to watch, but not practical. I’d recommend a good pair of boots 😉 ). The invisible hand will also be responsible for punishing Victoria’s Secret for getting woke.

That same invisible hand could be used to explain the record number of gun sales over the last two years.

There is a general feeling that something unpleasant is building. As a result, more people are buying guns than ever before.

Many of these people are first time gun owners, who may be intimidated at the prospect of purchasing a weapon. I’m here to tell you, don’t be intimidated. A gun is a tool, just like a drill press, a table saw, or an automobile. Like any tool, it must be handled properly. But it should not be feared.

Far more people are injured or killed each year by cars than by guns.

But What Gun Should I Buy?

“How to get strapped,” for the girlfriend without a boyfriend.

I had a conversation with a lady on social media today, who mentioned not having a clue about ammunition (and by extension, guns). She may never be interested in diving in to gun culture… but then again, she might. And so might you, the woman reading this.

I want to give you the basic principles that will work for anyone. If you’re expecting to leave here knowing which brand and caliber to buy, then this won’t help you. Instead, I want you to know how to choose for yourself what works.

A Word About Caliber

Prices seem to be coming down in some calibers. But not all. Watch this short video interview with a gun store employee about the possible reasons why.

With this in mind, understand that your choice of caliber will strongly influence the affordability of the ammunition you buy.

The Basics of Gun Buying

Before you start; if you are in a gun store, and someone tells you “you need to buy brand X,” without knowing you, or being on the range with you, stay away from that shop.

Find a gun shop that has a shooting range. It doesn’t matter whether the range is indoor or outdoor. These shops generally have a number of weapons available as rentals.

I don’t work in a gun shop, but I can second what Maggie said in the video above. I have a .380 Automatic, and the ammunition for that thing is expensive ($0.50 per round for reloaded “Full Metal Jacket,” or FMJ). Whereas 9mm Luger ammunition is $0.39 per round for the same thing). Self defense rounds (typically a self defense round is some form of JHP, or “Jacketed Hollow Point”)

Buy a box of ammunition, be it .380, 9mm, .38 or similar. Rent three or four guns in that caliber so that you will be able to see and feel the difference in how each gun handles for you.

It’s worth spending $50-100 on ammunition and gun rentals in order to find a weapon that you can “bond with.”

Glock, Springfield Armory, Walther, Sig, H&K, CZ, and Smith & Wesson are the names you will probably see most frequently as you test fire pistols on your range.

How to Evaluate a Gun?

Follow these steps to get the most bang for your buck

Dad jokes aside, you don’t want to waste ammunition. The point is to make a decision in the most cost-effective manner possible.

The range will have paper targets available for you to fire on. Bring a sharpie with you, and draw several circles on your target, each about 10″ in diameter. If you’re as bad at drawing circles as I am, then bring a paper plate and trace around it. Clip the target to the mount, and send it down range.

load up two magazines with five rounds each. If you only get one magazine with your rental, just load five rounds into the magazine.

The reason for only loading five rounds, is so that you will have the opportunity to test the magazine release button. Does your thumb reach it? Does it take a lot of force to mash it?

Take a look at these instructions for the five basics of accurate shooting: proper stance, grip, sight alignment, trigger control, and follow-through. It’s very simple. But if you’ve never heard of it, or seen it, then you may be overwhelmed at the thought of it.

Ready on the Firing Line?

Now it’s time to send some rounds down range.

Grip it firmly, sight in, and gently squeeze the trigger until it goes bang. It should startle you.

Stay calm and squeeze on:

Anticipating the recoil is a very common error made by new shooters. Some people prefer to introduce shooting with a very small caliber like a .22 in order to teach the shooter not to fear the recoil. Others prefer to just train through it.

Give yourself 10 or 15 rounds to get accustomed to the noise and the recoil (which should be minimal if you’re using intermediate calibers like .380 or 9mm). When the slide locks to the rear after the magazine runs out of ammunition, use your thumb to press the magazine release catch. Does it slide out easily?

Finally… now that you’ve gotten a feel for what it’s like to fire, it’s time to compare the weapons against each other.

Fire five rounds from each weapon, with each weapon change, aim at a different circle that you’ve drawn on the target.

Which gun was most comfortable to hold? Which sighting system did you prefer? Which gun had a recoil that felt best to you? Most importantly, did you find your shot groups were significantly tighter with any one of the weapons you tried?

Evaluating each weapon in this manner, you should be able to make a decision about which gun you prefer.

If you’ve come this far, and you enjoyed the experience, you will probably have enough questions to go searching on your own for answers.

Check out Amy 556, A Girl and a Gun (shooting league), and Babes with Bullets.

The Most Important Weapon

Your will.
Or… Mama bear is a dangerous animal.

What are you willing to do to protect your loved ones? It may seem cliched, but it’s not. If you know that you would be unable to commit an act of violence against another human being, then you should not carry a weapon.

I don’t say this looking down my nose at you. I want you to be safe. I want your loved ones to be safe. If you have a weapon on your person that you are ultimately unwilling to fire, then you are at risk of being harmed by your own gun. That is not something I would wish on anyone.

While some self reflection may be in order, I have seen what people are willing to do to protect their family. I believe in you 😉