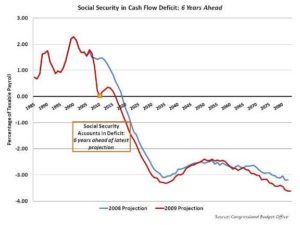 It’s time to free ourselves from the Ponzi scheme of Social Security.

Last December, I turned 37 years old, so retirement isn’t something I have spent many nights losing sleep over.

When I received that yearly mailer from the Social Security Administration, it got me thinking… I’ve been paying into the Social Security system for just under 20 years now; the future value (at 65) of my present contributions (to date) amounts to a NEGATIVE rate of return. Yet, we are told by pompous grey haired men who speak using the “royal we” that any plan to privatize the Social Security investing is a “Risky Scheme.”

Do they honestly think we are that stupid? Look back over any 20 year period in the history of the stock market and you will not find a negative rate of return.

Social Security is a Ponzi scheme.

“Unsustainable Ponzi scheme?… Jones, have you gone ’round the bend? What are you talking about?”

Not at all. To illustrate, let’s look at the case of Ida Mae Fuller, the first person in America to receive social security benefits. Miss Fuller worked under the Social Security system for just shy of three years, and received benefits from 1939 when she retired, until 1975 when she died.

It is not, nor has it ever been, the federal government’s job to provide for my retirement. So here’s my solution:

All Americans who are over 50 years of age as of 31 December 2005, can count on receiving Social Security benefits until their death.

However, if you are under 50 years of age as of 31 December 2005, YOU not the government are responsible for your retirement.

Since I want to do my part in providing for the “Gimme generation”, I am more than willing to write off all my previous contributions as a loss (which I will claim as such on my income tax returns for the next 10 years).

If you have ever felt this way, you are not alone.

“Put me clearly on the record: I don’t want to ‘reform’ Social Security or ‘rescue’ it or ‘adjust it to the new realities of the 21st century.’ No, I want to hit it in the head with a shovel and bury it in a New Jersey landfill. It is time to kill the rotten, lousy, ‘rip off your kids to keep granny in bingo cards’ Ponzi scheme that we call Social Security, but would be more accurately described as ‘the government taking money from poor, hard-working young families and giving just enough of it to retirees to keep them broke, too’.”