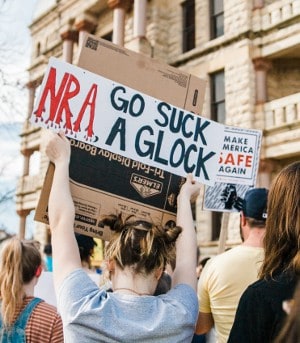 Why do Liberals Hate Guns?

A female reporter was interviewing a youth programs leader about what the boys had to look forward to for summer camp. The conversation goes like this:

Female Interviewer: So, what things are you going to teach these young boys this summer at camp?

Group Leader: I don’t see why, they’ll be properly supervised on the rifle range.

Female Interviewer: Don’t you admit that this is a terribly dangerous activity to be teaching children?

Group Leader: I don’t see how. We will be teaching them proper rifle discipline before they even touch a firearm.

Female Interviewer: But you’re equipping them to become violent killers.

Group Leader: Well, you’re equipped to be a prostitute, but you’re not one, are you?

Let’s give a big shout out to Elizabeth Cady Stanton and her coven of harpies, without whom, this national slide into leftism, tyranny, and then obscurity would have taken far longer.