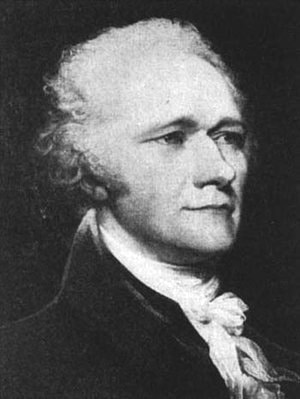 Were the Federalist Papers a sales brochure for glorious liberty under the Constitution?

The struggle between liberty and power has been going on in the United States since before the ink was dry on the proposed constitution.

You see, the federalist papers were nothing more than editorial pieces, published in mainstream media outlets for the purpose of swaying public opinion in favor of ratifying the proposed constitution. Having recently waged a war to secede from England, the mother country, there was a general opposition to a strong national government.

In practice, Hamilton and the federalists [who aspired to national greatness through the vehicle of “a properly energetic government”] began to invent additional powers for the constitution almost immediately. The doctrines of “implied powers” and “resulting powers,” as well as twisted interpretations of the Commerce Clause are products of Hamilton’s brilliant, but tyrannical mind.

Worst of all was his attitude about the States & their relationship with the federal government. During debate over ratification, Hamilton told the New York State Assembly that the “nation” and not the States, had “full power of sovereignty,” which was a clear contradiction of the constitutional compact, as well as history.

And how could these ideals take hold in a republic of republics, only recently freed from the bondage of centralization?

The Origin of Judicial Tyranny

1: The judicial Power shall extend to all Cases, in Law and Equity, arising under this Constitution, the Laws of the United States, and Treaties made, or which shall be made, under their Authority;—to all Cases affecting Ambassadors, other public Ministers and Consuls;—to all Cases of admiralty and maritime Jurisdiction;—to Controversies to which the United States shall be a Party;—to Controversies between two or more States;—between a State and Citizens of another State;10 —between Citizens of different States, —between Citizens of the same State claiming Lands under Grants of different States, and between a State, or the Citizens thereof, and foreign States, Citizens or Subjects.

3: The Trial of all Crimes, except in Cases of Impeachment, shall be by Jury; and such Trial shall be held in the State where the said Crimes shall have been committed; but when not committed within any State, the Trial shall be at such Place or Places as the Congress may by Law have directed.

Strangely, for a branch of the government who later claimed “it is emphatically the province and duty of the judicial department to say what the law is“… there are very few enumerated powers granted to the judiciary in the constitution.

Why? …It’s the “and equity” that the killer. Equity is a body of law that addresses concerns that fall outside the jurisdiction of common law, and includes the power to settle a matter based on conscience and whim.

Essentially, the national government has claimed for itself the right to determine the limits of its own power, and the last word on what is, and is not law… even within states and municipalities.

And you think this can be resolved at the ballot box?